End of the WORLD

It’s so strange, walking down Bourbon Street and seeing everything boarded up! There aren’t many people walking around — mostly National Guard in camouflage uniforms (so the hurricane doesn’t see them?) and tourists lined up outside hotels for airport shuttles.

It took us nearly an hour to find someplace that would serve us lunch! We finally found an Arby’s and wandered in, dragging our luggage behind us… And discovered this is apparently a staging location for the National Guard.

They’re eating big lunches to build up their strength, I guess, for enforcing tomorrow’s curfew. Yes, once the citywide evacuation order goes into effect, anyone found outside will be detained and arrested. That’s one way to cut down on looting!

Speaking of arrest, there was a homeless guy hunkered down on the second floor at Arby’s… The cops just came in, handcuffed him, and took him away. He complained that he was a tax-paying citizen, and one of the cops quipped, “You don’t have a home or a job, how are you paying taxes?”

We’re hangin’ out here enjoying the AC, waiting for our HERO Jonathan to come pick us up (Note to self: thank Jessica for lending us her BFF!) We’re stashing our luggage in his car while he tends bar at Oz tonight, and then will figure out our next steps once he gets out at 9:00. Presumably we’re hanging with him and his friends after he gets off of work, and then either crashing on his floor or going to the airport and napping there ’til our dawn flight. Either way, it’s a great comfort having a friend here.

Last we heard, Shirley Q Liquor is still performing this afternoon! And there’s a free concert afterwards, including Kimberly Locke from American Idol! Alledgedly… We’ll see if they’re still here, or if they evacuated when the hotels closed.

Here’s how you KNOW things are about to get really bad here… All of the Starbucks are closed.

God help us all! 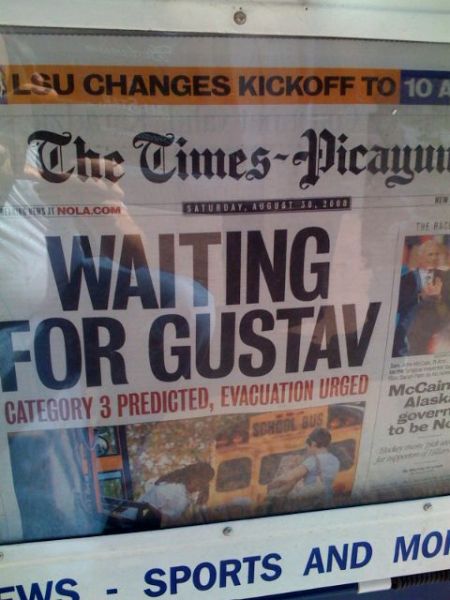 This entry was posted on Saturday, August 30th, 2008 at 12:32 pm and is filed under Uncategorized. You can follow any responses to this entry through the RSS 2.0 feed. You can leave a response, or trackback from your own site.

One Response to End of the WORLD