Not long after the high-profile shenanigans of Itawamba Agricultural High School’s decision to cancel prom, rather than allowing a lesbian couple to attend together, openly gay high school senior Derrick Martin worked up the courage to ask for permission to bring his boyfriend to his Bleckley County High School prom.

He got his wish, but things aren’t turning out quite as he had expected.

At his school you have to get permission to bring a date from outside counties, so Martin had to ask the principal for approval. Though the principal initially told Martin that their small town of Cochran, Georgia “wasn’t ready for it,” she later confirmed that there was no policy in place against same-sex couples attending the prom together.

On the one hand, the young man has been pleasantly surprised by the support from gay rights activists all over. People have sent flowers to the school, offers to pay for a stretched limo on the big night, and even an offer to buy Martin a tuxedo so he would be less concerned about hecklers messing up a rented tux.

Unfortunately, not everyone is so supportive. Martin has informed the Macon Telegraph that his parents have since kicked him out of the house, as they were upset about all of the media attention. He’s currently staying with a friend.

How wonderful that this small-town Georgia high school is affirming that a gay student can bring his/her significant other to prom as a date, rather than attending as the “date” of an opposite-sex friend… But how disappointing that this is yet another gay teen whose parents have allegedly rejected him. 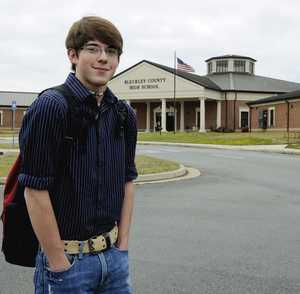 This entry was posted on Wednesday, March 24th, 2010 at 5:33 pm and is filed under Uncategorized. You can follow any responses to this entry through the RSS 2.0 feed. You can leave a response, or trackback from your own site.