Gov. Paul LePage, the Republican from the state of Maine, is apparently no stranger to bold and brazen statements. Infamous for tough talk during his campaign, he’s now directing that blunt verbal assault at a new target: the NAACP.

Specifically, he told the local NAACP chapter that they could “kiss my butt” recently. And surprisingly, I’m not entirely outraged by it.

To be sure, that kind of language isn’t becoming of a public official, and certainly not from the governor of the state. (Alabama governor Robert Bentley is giving us enough verbal diarrhea this week, thank you.) But to a minor degree, I can understand where his frustration is coming from.

It all started when the local chapter of the NAACP sponsored an event on Martin Luther King, Jr. Day at a local prison, in which the governor was invited to meet with several black prisoners at the state prison. The governor apparently required that the event be open to all prisoners, not just those who are black, if he was to attend. When the NAACP declined, he refused to attend.

The governor’s refusal apparently stems from his desire to avoid capitulating to special interest groups, and considers the NAACP to be one. The NAACP chapter made no secret of its displeasure at Gov. LePage’s refusal, prompting the governor to publicly respond with the aforementioned “kiss my butt” invitation.

What makes this even juicier, from a political gossip perspective, is the governor’s more detailed statement about the dispute:

“They are a special interest. End of story…and I’m not going to be held hostage by special interests. And if they want, they can look at my family picture. My son happens to be black, so they can do whatever they’d like about it.”

Yes, Gov. LePage has an adopted son from Jamaica, which certainly helps bring cries of racism to a screeching halt. And his refusal to attend the event seems to be focused on the fact that it was deliberately focused on one subset of prisoners, not the general population, which the governor seems to view as segregational behavior as a public official.

Is it possible that I actually find myself agreeing with a Republican leader who became infamous for vowing on the campaign trail that he would tell Pres. Obama to “go to hell” if elected as governor?

I actually understand where the governor appears to be coming from. I’m all for events that are designed to focus on a group of people — whether that group is identified by race, religion, color, national origin, sexual orientation, gender, gender identity or expression, disability status, age, veteran status, and so on — as long as those events don’t deliberately exclude others from being able to attend and, in an appropriate fashion, participate.

If non-black prisoners were to attend the event, and behaved appropriately and respectfully, would that be a great opportunity for them to learn more about the experience of their black cellmates? Wouldn’t that have been a chance to build bridges of understanding between different groups of prisoners? Is there a good reason why having, say, white prisoners in the room would’ve somehow lessened the impact?

Again, I’m not condoning the governor’s choice of words or unstatesmanlike behavior. But based purely on a quick reading of the facts as presented in the news article from which I learned about this, it seems like he may have been coming from a reasonable position in the dispute. (And yes, having a black son certainly helps me make the rather large assumption that he isn’t approaching this from a racist perspective.)

It’s unfortunate that a potential opportunity for improved relations between different groups has instead spiraled into a public dispute. I wish they’d all take a deep breath and try to see each other’s perspective on the matter. 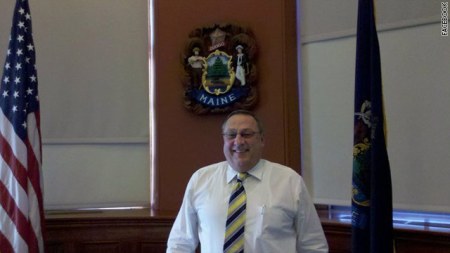 This entry was posted on Sunday, January 23rd, 2011 at 10:11 am and is filed under Uncategorized. You can follow any responses to this entry through the RSS 2.0 feed. You can leave a response, or trackback from your own site.

One Response to Maine governor vs. NAACP