Violence in the home is a terrible thing, and can certainly destroy the lives of innocents. Sadly, the tragedy of domestic violence has raised its ugly head in our home, and I can’t hide the results. So here I am, sharing my awful burden with all of you.

Puck and Nala are abusing each other. There, now it’s all out in the open.

Puck is around three years old, and Nala is about three months old. And despite being about 1/3 of his size, Nala takes great delight in tormenting her “big brother” by chasing him around the house, nipping at his ears and neck, and standing up on her hind legs to box at his face. They roughhouse frequently and it’s usually all fun ‘n games.

Last week the play went a little too far. Lil’ Nala got a tough too aggressive with Puck, and he snapped back at her. She yelped and cried, and there was a scratch under her eye and another on her leg. At least, that’s all it seemed like… until an appointment at the veterinarian’s office on Monday.

The swelling around the scratch under her eye had gone down by the morning after the incident, and the one on her leg healed up just fine very quickly also. But then, a couple of days later the knot under her eye started resurfacing… and on Sunday night, it started swelling up quickly to the point that her eye was squeezed half-shut by the lump under it. As you might imagine, I was at the vet’s office first thing the next morning. 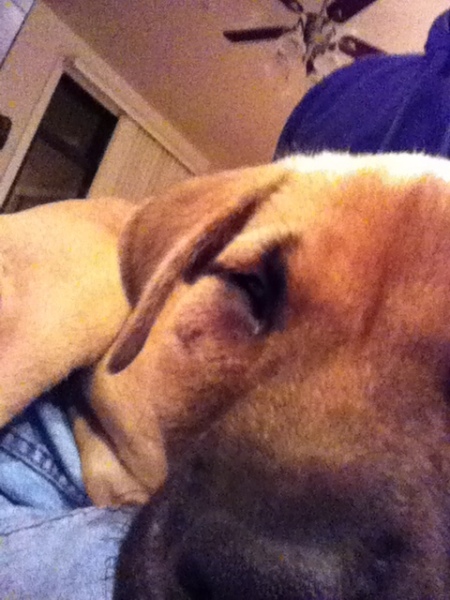 First they checked for dirt, debris, or scratches in her eye, thinking that maybe something got stuck in there during the dogs’ scuffle and had irritated her eye to the point that it swelled up. They even sedated her so they could get a good look without making her uncomfortable — but it turned out nothing was wrong with the eye. They checked the scratch in the center of the lump, and though it was slightly infected and had a little dried blood and pus, it didn’t explain the large (and solid) knot under her eye.

Note the lump under her right eye

An x-ray showed the true cause of the issue… THE BONE IS BROKEN. Yes, Nala’s FACE is broken… Which means that scratch is actually more likely to be a bite. Though the teeth barely broke the skin, there was enough force behind it to break a puppy’s bone. Check out the x-ray: 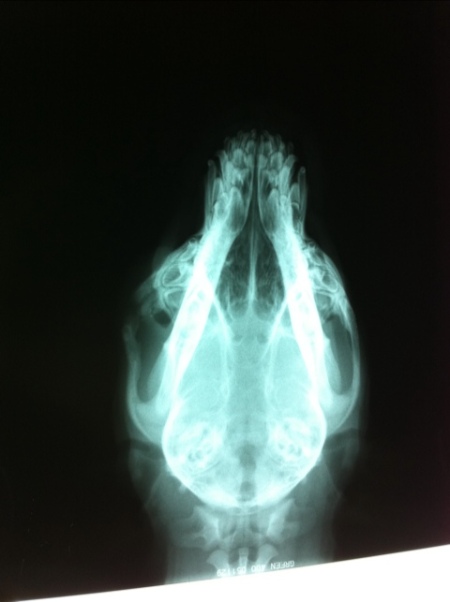 Compare the left side to the right side -- see the extra rounded curve and missing section on the left?

What’s even crazier about all of this is that SHE DOESN’T SEEM TO CARE. Every day from the morning after their tussle until today, she’s been her normal hyper playful self. She even spent all day at the Whitewater Center on Saturday, charming dozens of people without giving the slightest hint that she had a broken bone in her face. Not a whimper, a cry, or a sullen retreat from play.

So what’s next? Essentially NOTHING. The vet doesn’t recommend trying to do any kind of surgical intervention, because she doesn’t seem to be experiencing any ill effects and there are always additional risks associated with surgery. So basically, we let it heal, and assuming there are no new developments, we leave it alone.

She’ll have a bump for the rest of her life, but as long as it doesn’t cause her any difficulty with eating or make trouble for her eye, it’s purely a cosmetic issue. And it hasn’t stopped her from mercilessly tormenting Puck and picking new scuffles with him, either.

What can I say… my little girl is a scrapper.

This entry was posted on Wednesday, March 16th, 2011 at 8:34 am and is filed under Uncategorized. You can follow any responses to this entry through the RSS 2.0 feed. You can leave a response, or trackback from your own site.

One Response to Domestic Violence