Economists speak of a concept called “sunk costs” in which people should base investment/business decisions on FUTURE required costs, rather than considering how much time, money, etc. they’ve put into something. The point is that what you’ve already invested is gone, regardless of what you do from here, so you should focus on what you’d be giving up from here on out if you continue.

It was precisely that principle that led me to get up and leave Young Frankenstein at intermission on Thursday night. The tickets had already been purchased, I’d already given up an hour of an half of my evening, and I wasn’t getting either my time or my money back… but I wasn’t going to waste any more of my evening sitting there being miserable. So I salvaged what was left of my night and got the hell out.

Now, fair warning… I’m a big fan of Mel Brooks movies. Some of my favorite movies include Spaceballs, Blazing Saddles, The Complete History of the World (Part 1), and yes, Young Frankenstein. So I was pretty excited about seeing the musical theatre version of Young Frankenstein when I heard that it would be touring through my town this season. That enthusiasm was dampened by some less-than-stellar reviews, so perhaps my expectations were lowered a bit before the curtain rose, but I still looked forward to the evening.

I now think that the reviews I read were being very generous… but then, I should’ve expected that. Many of the reviewers here in Charlotte seem to love everything, or at least seem hesitant to say something unkind about a theatrical production. You’ve probably noticed that I don’t have that problem here on GatorUptown.com.

When this show was good (which was quite literally for MOMENTS here and there) it was because it captured the classic Mel Brooks wit and style. Yes, I laughed out loud a couple of times, and each of those moments gave me a brief glimpse of hope… But when it was bad (which was pretty much any time the singing and dancing started) it was PAINFUL. And ultimately it just became too much disappointment to continue suffering through it.

It’s honestly like the producers of the show took everything that was superb about the movie and took a big steaming dump on it. (Sorry for the visual.) The song-and-dance numbers completely obscured what I loved about the film, seemingly just there to add filler material and earn the classification of a musical. The songs themselves were completely unnecessary, the singing perfectly fine but not at all memorable, and the dancing was again fine but distracting. They would’ve been far better off just creating a stage version of the movie without trying to force it into a musical.

What probably made the experience all the more disheartening was that I watched the film in the early evening before the play itself, having it on television as background while catching up with an old friend. Still, even with it just as a backdrop, I still found my attention caught by scenes here and there, classic lines, hysterical facial expressions, and so on. There’s so much MAGIC in the simplest components of Young Frankenstein the movie — it’s a damned shame they managed to near-completely eclipse those with the musical tomfoolery of the stage production.

And no, I’m not just bitter that the stage actors failed to live up to the legacy of Gene Wilder, Madeline Kahn, and Cloris Leachman. I frankly didn’t expect them to — and I have to give props to the actor playing Dr. Frankenstein for not trying to mimic Gene Wilder, who of course is completely irreplaceable. But even with them trying to give their own performance separate from the film (well okay, the actress playing Frau Blücher didn’t distance herself at ALL from Leachman’s interpretation) it just didn’t work. Only the actors playing Igor and Inga came close to buoying my spirits during the show, and they just weren’t strong enough to overcome their castmates.

Crack open a bottle of wine, get a friend or two over, and watch the DVD. You will have a MUCH better evening and save yourself a lot of money and disappointment. 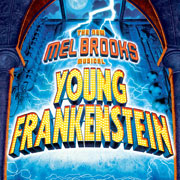 This entry was posted on Friday, March 18th, 2011 at 8:46 am and is filed under Uncategorized. You can follow any responses to this entry through the RSS 2.0 feed. You can leave a response, or trackback from your own site.

One Response to Young Frankenstein