Friends and longtime readers probably are sick to death of hearing about Italy from me, but my love affair with the country continues unabated. If anything, our several visits have made me more enamored by Italy, rather than less.

We first visited Italy on our honeymoon, which also served as a one-year-anniversary trip and my husband’s birthday. (It had to count for quite a few things, apparently.)  I wrote an introduction to that trip previously, then a quick check-in and a summary of Positano and Rome… And then I apparently started to write about our triumphant return to Italy two years later, but then never followed through once I actually landed there. (Short version: we had a lovely stay in Cortona, explored Florence more deeply, and discovered Venice for the first time.)

I see now that I actually don’t appear to have written at all about the two trips to Italy from 2018.

We went back again in February with friends to get a little more time in Venice, spent two nights each in Cortona and Florence, and wrapped up our trip with our first visit to Milan (mostly because that’s where our flight home was from). The highlight for me was our second time at Carnevale di Venezia, the Mardi Gras of Venice, about which I’d been nostalgic since the previous year.

Then, in advance of starting the new school year actually teaching on campus, we went back to Italy in the summer, with different friends joining us for return visits to Positano, Cortona, Siena, and Milan. (Shockingly, we didn’t spend any real time in Florence at all, which is unlike us.)  By far, the best part of this trip was the Palio di Siena horserace in Siena, which has shockingly eclipsed Carnevale di Venezia as my favorite event in Italy. I’m amazed that I didn’t gush about it over the summer — clear evidence of how rarely I think about my blog these days. (I’m still mulling over what to make of the gradual decline of the blog, by the way… mostly I attribute the lack of posts to a never-ending series of papers to be graded, but still, damn.) 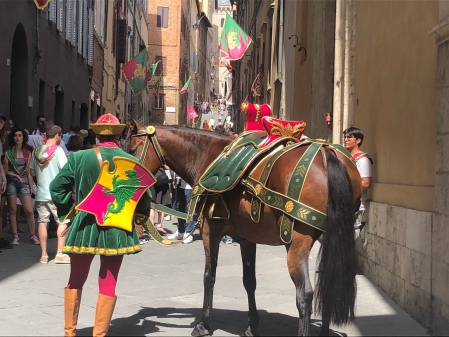 These trips have absolutely spell-bound me. And, to perhaps no-one’s surprise, we’re going back for Spring Break this year, in less than seven weeks.

What’s different for me is that I’m slowly starting to not think of myself as a tourist, precisely… We’ve been to Italy enough times now that we have friends in several places there, we have favorite restaurants to go to, we have our cheerful routines. Hell, I probably have more favorite places that I’ve been to multiple times, and more friends who don’t work with either me or my husband, in Italy than I do in West Palm Beach, where I’ve lived for almost a year now. This feels a lot like it did when I visited New York several times a year while living in Charlotte: a prelude to eventually being able to legitimately call it home, but a cherished getaway with favorite places and people in the meantime.

Expect some additional announcements about Italy later. Ciao for now!

This entry was posted on Tuesday, January 15th, 2019 at 9:58 am and is filed under Uncategorized. You can follow any responses to this entry through the RSS 2.0 feed. You can skip to the end and leave a response. Pinging is currently not allowed.